Moving beyond the sleep training culture

At the beginning of the year, I established The Beyond Sleep Training Project.

Originally, I wanted to collect tales of how people have managed the early years of their children’s lives without sleep training at all or if they had ‘failed’ to successfully sleep train and were forced to come at life from a different angle. I wanted to collate these tales in an eBook to be able to offer a resource for others who wanted to be able to see that there truly was a way to do this and still be a happy, fulfilled, functioning family. The book is a work in progress with many tales already collected and more still in the works.

The group that I created to provide contact with those who wanted to be a part of the Project has blossomed into a being of its own! With nearly 3000 members as I write, it now serves as a safe space for people to seek advice, solidarity and ideas where they can be sure they will not have sleep training suggested to them. It’s a beautiful space and it has filled me with so much hope and enthusiasm as so many people actively take part to be the change they wish to see in the world.

But, I must admit I was stung today when I was told that my efforts only serve as an echo chamber for those who just want to hear one way and that I promote an ‘us and them’ mentality which is not helpful and alienates the majority of people who would prefer that I showed some respect for their parental choices for their own family.

Really? I thought. Am I really just going around in circles with those who would have found this path without so much as a hint of online support? Am I really alienating people who would otherwise have supported my choices?

I thought on it briefly but it honestly did not take me long to disagree on both counts.

I know the first claim to be utterly untrue because I am proof that unless people know they have the choice not to sleep train, often they feel like it is something they MUST do. I did. I did it. I have been on the other side and everywhere in between. I know I am not the only one to experience this either, so no, this is not an echo chamber. This is mothers who know better and those who want to do better. It is mothers wanting to go against the grain because the grain feels all sorts of wrong for them and their family. 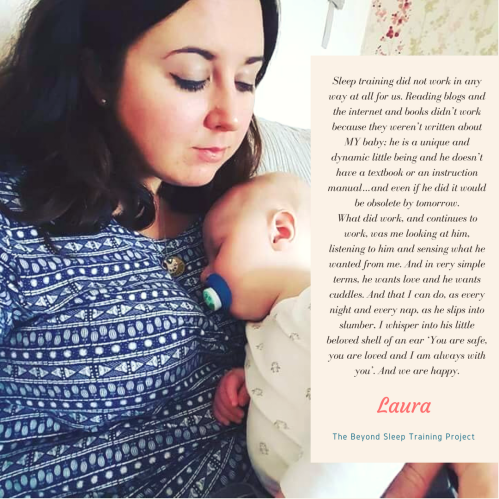 On the second count, I hate the ‘us and them’ bullshit as much as the next person but I will not sit back and pretend for a minute that I am accepting of the practice of sleep training as a legitimate parental choice. I won’t because don’t believe it is. I wish to see it removed from the parenting repertoire entirely and assigned to pages of history books. I am passionately opposed to this practice. My passion and belief stem from extensive reading and research.

This does not mean I am against ‘them’ being the mothers who have sleep trained or will in the future. I have said time and again, I AM A SLEEP TRAINING FAILURE, I did it. I know why people do it, I know its appeal, I know the sales pitch, I know the arguments and I know the heartfelt belief in the process. This isn’t a matter of ‘us and them’ in the ‘good mother, bad mother’ mummy wars bullshit. Just as the formula companies profit daily from promoting the Breastfeeding Nazi bollocks, the Sleep Training industry profits from ensuring that mothers feel as though they need to take a side. The side of heavenly sleep or the side of ridiculously unnecessary sleep deprivation. They like to take away any true ‘choice’ by making it seem so utterly ridiculous for you to consider not doing what they say. They rely on studies that have zero interest in biologically normal infant sleep behaviour and instead focus on confirming why the bizarre western practice of solitary sleep and behaviourist approaches to infant sleep are ‘safe’. They serve to protect the main goal of society which is to get people back to being as economically productive outside the home as soon as possible.

I am DONE with this.

I am done with this industry and the huge amounts of money it generates from desperately tired and vulnerable families.

I am done with their disregard for a baby’s legitimate need for night time parenting.

I am done with false science and scaremongering.

I am done with this being accepted mainstream parenting practice.

It is not okay.

It never has been.

It never will be.

As a society, it’s high time we move beyond this sleep training culture. Our babies and their families deserve better and until such time that we expect and respect normal infant sleep behaviour we will continue to place unrealistic and unfair expectations on our youngest and most vulnerable members of society and undue pressure on their families that is completely at odds with normal behaviour.

We can and should do better. 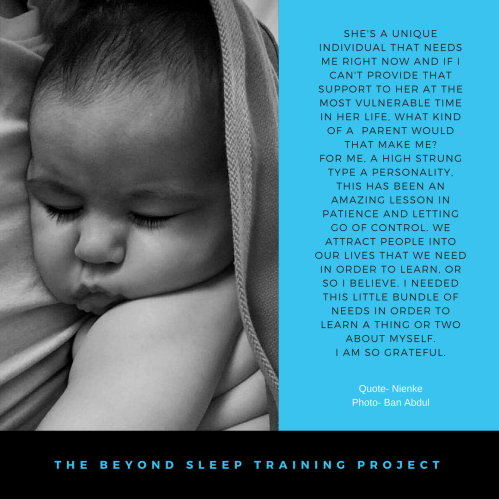